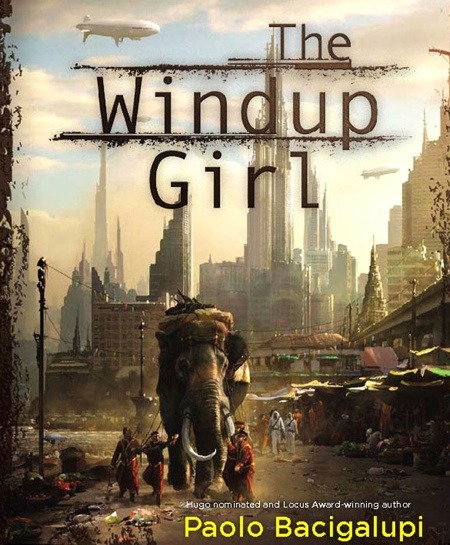 The Wind-Up Girl came highly recommended by my family, and of course the usual breathless praise from within the sci-fi community made it out to be nothing less than a Neuromancer for this modern age. Biopunk, a dystopian future made from only the freshest fears of the present. It partially delivers on this promise, but also fails in the ways modern books I’ve read recently tend to fail.

The premise is certainly the best part of the book. Some distance into the future, perhaps a hundred years or so, bioengineered crops and organisms have supplanted natural ones, giving rise to new plagues and food shortages — not to mention a rising sea due (I assume) to global warming. The result is the “Contraction,” a reversal of the “Expansion” era of our day. Fuel and power are precious and the universally acknowledged currency is calories. The story takes place in Krung Thep, AKA Bangkok, in Thailand, where the Thai have maintained independence by ingenuity, independence, and grit. And, as a new and disease-resistant fruit introduced at the outset suggests, a seedbank and skilled bioengineers.

Unfortunately, the book never really delivers on its promises. The landscape is foreign in a way, but also filled with the lazy analogues endemic to modern sci-fi. The “kink-springs,” for instance, are nothing more than batteries, no matter how named. The privations of the Contraction are no barrier to most of the characters, poverty and heat seeming to be the main difficulties — whenever a “rule” of the new world is inconvenient, it is discarded, and guns, cars, and other things that should be impossible in this new world regularly appear; one is not convinced of their rarity simply by the characters gasping at their appearance. And the story itself is easily abstractable from the world; the Environment Ministry (the “White Shirts”) and Trade Ministry could just as easily be Pepsico and Coca-Cola, or Boeing and Northrup Grumman, since the conflict is more or less political. That’s where the book fails: despite the well-conceived backdrop, very seldom in The Wind-Up Girl (an almost peripheral character, incidentally) does anything happen that couldn’t happen in any other book or world. In the end, the meat and potatoes are generic thriller, and the bioengineering and global cataclysm are simply sauce.

The writing is also spotty. Like so many modern books, whatever isn’t a labor of love (often the premise and a couple inspired characters or situations) is filler, and you can tell when Bacigalupi is writing something he doesn’t particularly care about. There are a few nice turns of phrase here and there, and the beginning hints at a fragmented timeline that is abandoned shortly. He lacks variety in his phraseology as well (towards the end of the book, during a firefight, I read the word “chatters” at least six or seven times in the space of a few pages), and the dialogue is totally undifferentiated. Every character speaks in the same voice, though their internal narration is better.

Bacigalupi has written several other stories that take place in this world, and it seems to me that his great accomplishment was painting the background, but he has yet to actually produce anything but sketches in the foreground. For world-building, he gets a gold star, but for storytelling, no credit. Other modern sci-fi I’ve read has the same prose shortcomings, but in the Virga trilogy (and even in Mainspring, an inferior book by far) the story was unique to the situation. Not so here.