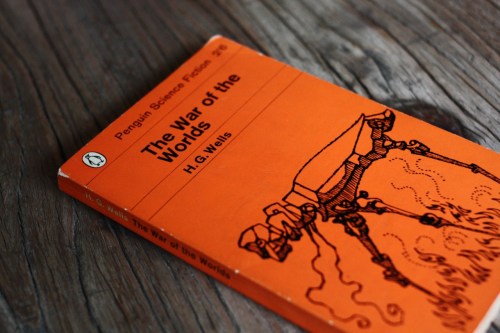 The War Of The Worlds is, most importantly, a book about the dangers of complacency. While Wells’ imagination and knack for a rolling narrative are worth applauding any day, the book is not at its heart a heroic adventure. Like The Time Machine, it is a warning. In that book he caricatured the erosion of humanity’s most important qualities; in this one, his message is more direct: the road of complacency leads to destruction – destruction of the literal and immediate variety.

Wells’ message was directed at the self-satisfaction that defined Victorian culture and the Pax Anglica that followed scores of years of warfare with France and Austria. While Europe rebuilt after Napoleon and the newly-formed United States consumed itself in partisan violence, Britannia lorded over the globe, carving up continents with the vanity of empire and despoiling the still-rich reaches of Africa and the “Indies.”

The smugness and swagger of this period must have thoroughly disgusted Wells. Perceiving the hubris of this apical imperium, he began to imagine what it would take to shock his country into seeing the transience of their glory. And his disgust with his countrymen is evident on every page, as the residents of this secure and superior world fail to comprehend that there may be such a thing as a threat. His encounter with a shaken churchman after escaping the site of a massacre allows him to wax dialectical and speak directly to the idiot culture he saw taking root:

He spoke abruptly, looking vacantly away from me.

‘What does it mean?’ he said. ‘What do these things mean?’

I stared at him and made no answer.

He extended a thin white hand and spoke in almost a complaining tone.

‘Why are these things permitted? What sins have we done? The morning service was over, I was walking through the roads to clear my brain for the afternoon, and then–fire, earthquake, death! As if it were Sodom and Gomorrah! All our work undone, all the work—- What are these Martians?’

‘What are we?’ I answered, clearing my throat.

‘But how can we escape?’ he asked, suddenly. ‘They are invulnerable, they are pitiless.’

‘Neither the one nor, perhaps, the other,’ I answered. ‘And the mightier they are the more sane and wary should we be.’

What is safety but a chance to forget danger? But if you forget it forever, you have only succeeded in creating a new danger.

My own country follows this path more and more. People are fools for their comforts, and the slightest misfortune produces livid entitlement. And while pet politics and cotton-candy news occupy the totality of their attention, conflicts and tragedies of a planetary scale fail even to register. What will it take for an American, charged with nimbyism and petty hatreds, to recognize that they have been neglecting not only the lives of the billions with which they share this world, but also the keystones of their own humanity?

Clearly that direct assault we all know, and the tenth anniversary of which we just marked, had the makings of such an event. But it failed to galvanize and only served as a springboard for division and infighting. When the death of thousands furnishes only insulation for our own bigotry and willful ignorance, what will humble us?

The story is a feat of invention, and is told in a vérité style that makes it more compelling than many a science fiction book I’ve read. But the message is the part that lingers in my mind: When the Martians landed in The War of the Worlds, their job was already done. A culture (or species) that believes itself exempt from catastrophe has already destroyed itself.