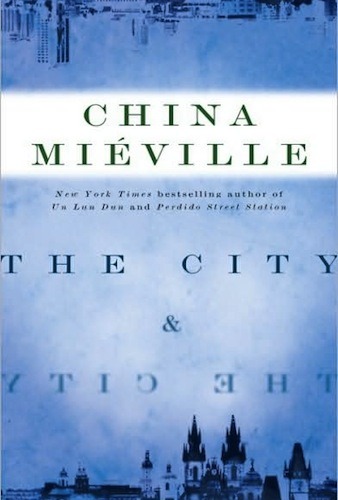 This book has been recommended by many a shelf tag in book stores, and won a number of prizes last year, or maybe the year before. At any rate, like The Wind-Up Girl, it was showered with praise and I looked forward to being pleasantly surprised by one of the more critically-acclaimed sci-fi books out there. Alas, I have been deceived again, and while the book is certainly not bad, it’s rather disappointing and any reader must immediately acknowledge that the setting’s potential was squandered on a ho-hum story and an abrupt, unsatisfying ending.

The concept of the two cities is by far the best thing about the book, but Mieville approaches it from a boring direction right off the bat. The idea is that there are two cities intertwined with each other, sharing streets, sidewalks, blocks, buildings even, but for many years contact has been prohibited between the cities, and people are brought up learning only to see their cities, to the point of not even perceiving the people, cars, and buildings in the other city, though they’re physically right there.

It’s a fascinating concept for a lot of reasons, and could make for very interesting storytelling, but Mieville immediately pedestrianizes it by making this selective perception totally superficial: citizens of one city do see the other, but then consciously “unsee” or “unhear” that particular information. It robs the scenario of any weight, and it seems clear to me that this was the easy way out.

To have followed through on the concept, it would be necessary to put the reader in the place of the narrator, truly not seeing the other city, omitting it from the text in such a way that the reader is aware something is missing – and later, the other city can be revealed and the information that they are physically superimposed can be produced in a more organic fashion. But this would be extremely difficult. Yet it is really the only way to do justice to this very compelling idea.

Mieville’s writing is spotty and I find his disdain for punctuation distracting. It’s one thing to barely use it at all, like McCarthy, or to create labyrinths of your sentences, like Sterne, but Mieville doesn’t establish any real style rules, and dialogue especially can be difficult to decode. Sometimes words are rendered as they might fall out of a person’s mouth, with uninterrupted repeats of phrases in a stutter or a question spoken as a statement. Yet sometimes people talk as if they’re reading a prepared statement. Sentence fragments pepper the chapters, as well, but without the consistency or punchiness necessary to give them the kind of atmospheric weight they are capable of carrying.

Another example of inconsistency is the use of English as, ostensibly, the language being narrated. Early on we are introduced to, if I remember, mechanical technicians, which the narrator says they shorten to “mectec.” So it’s an abbreviation based on the phrase as rendered in English? Yet elsewhere he uses made-up words in the other language to refer to jargony items, militsya for the military police in Ul Qoma, for instance. Which is it, mine author?

And sometimes the writing is just plain bad. Consider this paragraph, describing an archaeological dig central to the story:

“At the edges of the big marquee was a wild-looking scrubland, thistled and weedy between a litter of broken-off architecture. The dig was almost the size of a soccer pitch, subdivided by its matrix of string. Its base was variously depthed, flat-bottomed. Its floor of compacted earth was broken by inorganic shapes, strange breaching fish: shattered jars, crude and uncrude statuettes, verdigris-clogged machines. The students looked up from the section they were in, each at various careful depths, through various cord borders, clutching pointed trowels and soft brushes.”

He appears to have no sense of the singular and plural, the unwieldiness and ugliness of a word like “depthed,” or the smirking pretension of “crude and uncrude.” At the edges was? Between a litter of architecture? Where is the narrator standing that he can describe the bottoms and inhabitants of pits on the far side of a soccer pitch? Granted you get the picture of the dig, more or less. But utility writing this is not. As an example of style it’s atrocious in several ways.

The most interesting bits of the story – Orciny, Breach, the history of the cities – end up more or less minimized or revealed in disappointing ways, sometimes in a hurry, as if the last tenth of the book were written on a deadline and the loose threads needed to be either tied up or snipped off stat.

All that said, once I got over my disappointment at the missed opportunities, the book was pleasant enough to read and short enough to finish in just a few days. Like The Wind-Up Girl, it was a meal I wanted to finish, even if I wouldn’t order it again.