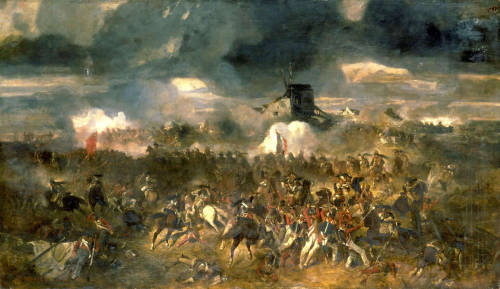 A passage from Les Misérables, with some minor aesthetic changes to form it into a shorter, more cohesive essay.
Napoleon’s army has just been scattered.

A few squares of the guard, immovable in the flow of the rout as rocks in running water, held out until night. Night approaching, and death also, they awaited this double shadow, and yielded unfaltering to its embrace. Each regiment, isolated from the others, and having no further communication with the army, which was broken in all directions, was dying alone. They had taken position, for this last struggle, some upon the heights of Rossomme, others in the plain of Mont Saint Jean. There, abandoned, conquered, terrible, these sombre squares suffered formidable martyrdom.

At dusk, towards nine o’clock in the evening, at the foot of the plateau of Mont Saint Jean, there remained but one. In this fatal valley, at the bottom of that slope which had been climbed by the cuirassiers, inundated now by the English masses, under the converging fire of the victorious artillery of the enemy, under a frightful storm of projectiles, this square fought on. It was commanded by an obscure officer whose name was Cambronne. At every discharge, the square grew less, but returned the fire. It replied to grapeshot with bullets, narrowing in its four walls continually. Afar off the fugitives, stopping for a moment out of breath, heard in the darkness this dismal thunder decreasing.

When this legion was reduced to a handful, when their flag was reduced to a shred, when their muskets, exhausted of ammunition, were reduced to nothing but clubs, when the pile of corpses was larger than the group of the living, there spread among the conquerors a sort of sacred terror about these sublime martyrs, and the English artillery, stopping to take breath, was silent. It was a kind of respite. These combatants had about them, as it were, a swarm of spectres, the outlines of men on horseback, the black profiles of the cannons, the white sky seen through the wheels and the gun-carriages; the colossal death’s head which heroes always see in the smoke of the battle was advancing upon them, and glaring at them. They could hear in the gloom of the twilight the loading of the pieces, the lighted matches like tigers’ eyes in the night made a circle about their heads; all the linstocks of the English batteries were approaching the guns when, touched by their heroism, holding the death-moment suspended over these men, an English general, Colville according to some, Maitland according to others, cried to them: “Brave Frenchmen, surrender!”

Out of respect to the French reader, the finest word, perhaps, that a Frenchman ever uttered cannot be repeated to him1. We are prohibited from embalming a sublimity in history.

At our own risk and peril, we violate that prohibition.

Among these giants, then, there was one Titan — Cambronne.

To speak that word, and then to die, what could be more grand! For to accept death is to die, and it is not the fault of this man if, in the storm of grapeshot, he survived.

To fulminate such a word at the thunderbolt which kills you is victory.

To make this answer to disaster, to say this to destiny, to give this base for the future lion2, to fling down this reply at the rain of the previous night3, at the treacherous wall of Hougomont, at the sunken road of Ohain, at the delay of Grouchy, at the arrival of Blücher, to be ironical in the sepulchre, to act so as to remain upright after one shall have fallen, to drown in two syllables the European coalition, to offer to kings these privities already known to the Caesars, to make the last of words the first, by associating it with the glory of France, to close Waterloo insolently by a carnival, to complete Leonidas by Rabelais, to sum up this victory in a supreme word that cannot be pronounced, to lose the field, and to preserve history, after this carnage to have the laugh on his side, is immense.

It is an insult to the thunderbolt. That attains the grandeur of Æschylus.

This word of Cambronne’s gives the effect of a fracture. It is the breaking of a heart by scorn; it is an overplus of agony in explosion. Who conquered? Wellington? No. Without Blücher he would have been lost. Blücher? No. If Wellington had not commenced, Blücher could not have finished. This Cambronne, this passer at the last hour, this unknown soldier, this infinitesimal of war, realizes that here is a lie, a lie in catastrophe, doubly bitter; and at the moment when he is bursting with rage, he is offered this mockery — life? How can he restrain himself? They are there, all the kings of Europe, the fortunate generals, the thundering Joves, they have a hundred thousand victorious solders, and behind the hundred thousand, a million; their guns, with matches lighted, are agape; they have the Imperial Guard and the La Grande Armée under their heel; they have crushed Napoleon, and Cambronne only remains; there is none but this worm of the earth to protest. He will protest. Then he seeks for a word as one seeks for a sword. He froths at the mouth, and this froth is the word. Before this mean and monstrous victory, before this victory without victors, this desperate man straightens himself up, he suffers its enormity, but he establishes its nothingness; and he does more than spit upon it, and overwhelmed in numbers and material strength he finds in the soul an expression: excrement. We repeat it: to say that, to do that, to find that, is to be the conqueror.

To this word of Cambronne’s, the English voice replied: “Fire!” The batteries flamed, the hill trembled, from all those brazen throats went forth a final vomiting of grapeshot: a vast smoke, dusky white in the light of the rising moon, rolled out and when the smoke was dissipated, there was nothing left. That formidable remnant was annihilated; the guard was dead. The four walls of the living redoubt had fallen; and thus the French legions, grander than the Roman legions, expired at Mont Saint Jean on ground soaked in rain and blood, in the sombre wheat-fields, at the spot where now, at four o’clock in the morning, whistling, and gaily whipping up his horse, Joseph passes, and drives the mail from Nivelles.

The battle of Waterloo is an enigma. It is as obscure to those who won it as to him who lost it. To Napoleon it is a panic; Blücher sees it only in fire; Wellington comprehends nothing of it. Look at the reports. The bulletins are confused, the commentaries are foggy. The former stammer, the latter falter. Historians are blinded by the glare, and are groping about in that blindness.

In this event, bearing the impress of superhuman necessity, man’s part is nothing.

Does taking away Waterloo from Wellington and from Blücher detract anything from England and Germany? No. Neither illustrious England nor august Germany is in question in the problem of Waterloo. Thank heaven, nations are great aside from the dismal chances of the sword. Neither Germany, nor England, nor France, is held in a scabbard. At this day when Waterloo is only a clicking of sabres, Blücher, Germany has Goethe, and above Wellington, England has Byron. A vast uprising of ideas is peculiar to our century, and in this aurora England and Germany have a magnificent share. They are majestic because they think. The higher plane which they bring to civilisation is intrinsic to them; it comes from themselves, and not from an accident. The advancement which they have made in the nineteenth century does not spring from Waterloo. It is only barbarous nations who have a sudden growth after a victory. It is the fleeting vanity of the streamlet swelled by the storm. Civilised nations, especially in our times, are not exalted nor abased by the good or bad fortune of a captain. Their specific gravity in the human race results from something more than a combat. Their honour, thank God, their dignity, their light, their genius, are numbers that heroes and conquerors, those gamblers, can cast into the lottery of battles. Oftentimes a battle lost is progress attained. Less glory, more liberty. The drum is silent; reason speaks. It is the game at which he who loses, gains. Let us speak, then, coolly of Waterloo on both sides. Let us render unto Fortune the things that are Fortune’s and unto God the things that are God’s. What is Waterloo? A victory? No. A lottery.

A lottery won by Europe, paid by France.

It was not worth putting a lion there.

1. Some editions of the book were printed with Cambronne’s oath, then more serious a matter, censored.

2. An enormous monument on the site of the battle commemorating the victory and the injury of William II of the Netherlands, the Prince of Orange.

3. Rain, Hougomont, Ohain, Grouchy: Heavy rain the previous night had delayed the battle, and it is reasonably argued that if the battle had commenced an hour or two earlier, Napoleon would have been victorious. A savage ambush at the estate of Hougomont had severely damaged the French infantry there. The road of Ohain was a sunken road at the top of a hill which Napoleon’s cavalry was unaware of, into which hundreds of horses fell, spoiling their charge onto the plateau of Mont Saint Jean. Grouchy commanded some 33,000 men who, for a number of reasons, never arrived at the main battlefield.